How Partnerships Can Open the Night Sky – Even During a Pandemic

By Cornerstones of ScienceJanuary 11, 2021Latest News
No Comments

Many People Don’t Get to Know the Night Sky at All — They Never Look at It.

When Cornerstones of Science decided to pilot a mid-pandemic in-person “Safe and Sane Star Party™” for the public, we knew we needed a partner who could add expertise and strong community connection, so we contacted our regional astronomer’s club. Astronomy clubs are expert at putting on night sky events, and they did not disappoint. Astronomy enthusiast James Shields and Rob Burgess presented a no-touch, distanced, and COVID-safe event on a dark evening at a local land trust property. Shields and Burgess even brought a large Dobsonian telescope and binoculars on a stand to show different setups for viewing the night sky. 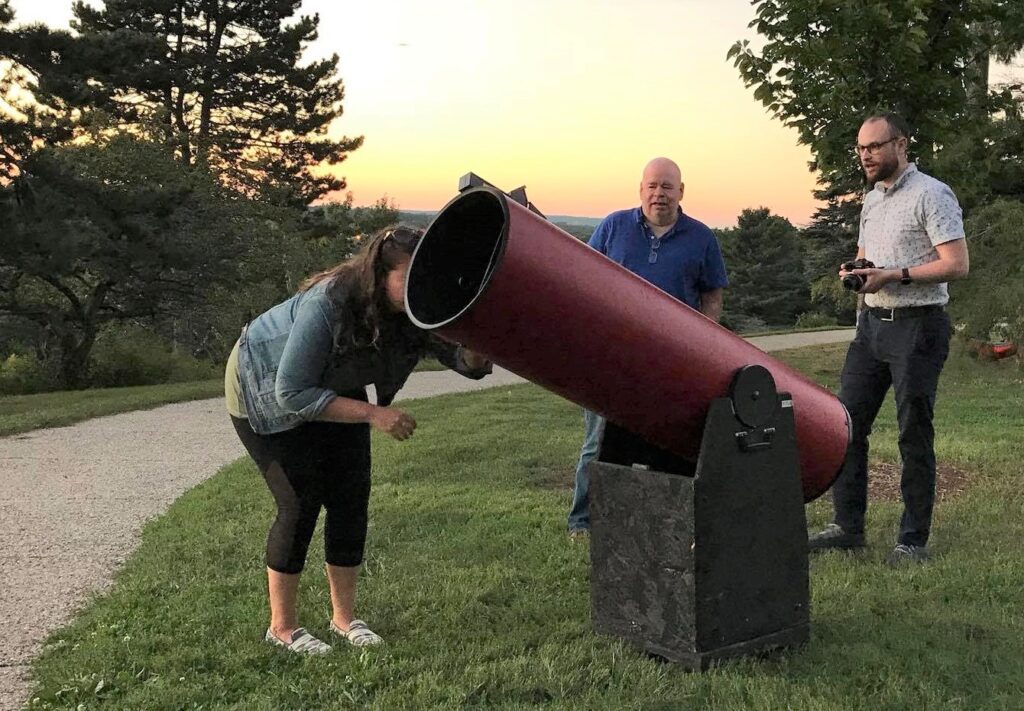 James Shields (center) offers a sidewalk astronomy talk with his huge Dobsonian Telescope, which was given to him by his father. Shields’ interest in astronomy was reawakened after he checked out a Cornerstones of Science telescope from his local library.

“My obsession for astronomy isn’t even the astronomy,” admits Shields, who works by day as a statistician and moonlights by night as an astronomy buff. “Astronomy is all about being out under the night sky, getting to know the constellations, and relaxing.”

As a board member of Southern Maine Astronomers, Shields has been tapped many times to be part of stargazing laser shows and events for local libraries, organizations, museums and retailers. “When you consider that something like three-quarters of people in the world never see the Milky Way, that’s pretty shocking,” says Shields. Yet, he acknowledges that there’s growing interest in night sky events and telescope manufacturers have experienced brisk sales as a result of the pandemic.

How a Library Telescope Opened a Door

Shields’ interest in astronomy was re-awakened after borrowing a Cornerstones of Science telescope from his local library. “I was always interested in astronomy but when my local library started loaning telescopes, I was the first in line,” he says. After that, his family checked out the telescope every chance they could.

He noticed that the library telescope was in high demand and librarians were asking for advice about what to look for. Shields got involved and eventually joined his local astronomy club. Today, he likens stargazing to bird watching. “Birdwatchers know the birds are out there and they want to check things off their list; I love to check deep sky objects off my list,” laughs Shields, “and I love sharing that experience with others.”

Making Memories While Learning About the Universe

Shields has more than a few great memories from his last three years as a committed stargazer. These include seeing the Perseid meteor shower and the Andromeda Galaxy. One particular evening in Acadia National Park was also very special. He attended a laser event put on by the Park Rangers who walked visitors through the constellations and the mythology behind their names and helped everyone find the different constellations. “It was spectacular,” admits Shields.

Libraries can serve as important hubs for providing STEM resources for patrons. And even during a pandemic, local astronomical clubs can help coordinate safe events and programs on the night sky. Click here to learn more about purchasing a modified Cornerstones of Science Telescope and Kit for your library.

Get in touch with us if we can support you.