By Cornerstones of ScienceApril 28, 2017September 17th, 2017In the Spotlight, Latest News
No Comments 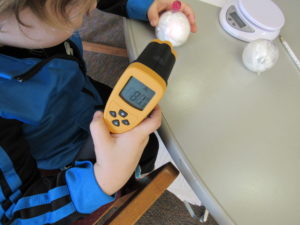 Fun with the Investigating the Insides activity and an Infrared Thermometer! Photo by Sarah Post

On Saturday January 28, 2017 approximately 300 people attended a three-hour STEM Saturday event at Festus Public Library in Festus, MO. The coordinated event was part of the NASA@My Library Pilot Project, which incorporates training librarians, seeking out experts to assist, using science tools and NASA-related activities, and community involvement all around earth and space science. A few days before the event, three librarians from Festus Public library went through a half-day training with Cornerstones of Science on the STEM tools and activities. On the day of the event, eight stations were set up around the library, six were facilitated and two were open play. One of the stations had a member of the St. Louis Astronomical Society presenting on the upcoming solar eclipse.
Stations included:

The library and the community members who attended the event loved it. Many of the attendees also spent time at the library doing other things such as using the computers and checking out books related what they learned at the different stations. Because the event was so successful, the library plans to hold similar events throughout the year.

We encourage other libraries to hold their own STEM Saturday event with items and activities you already have at your library or look up activities on the STEM Activities Clearinghouse. You can also purchase some of the items mentioned above online.